Access to clean, safe sanitation is considered a fundamental human right – but today, about half of the world’s population still goes without. With billions of dollars needed to close the gap, developing countries often turn to the private sector for support. But as we explore in this article, there are two main factors that determine whether collaborations between the public and private sectors are likely to succeed.

Today, only 54% of the world has access to safely managed sanitation, with one in four lacking access to a toilet and around 45% of household wastewater being discharged without safe treatment. And while the UN has a target of achieving universal access by 2030 (SDG 6.2), this target is forecast to be missed by 35%.

Poor sanitation is an issue with social, economic, health, and environmental ramifications; it impacts quality of life, pollutes natural ecosystems, contaminates resources, and releases methane – the most potent greenhouse gas (GHG). Natural disasters such as flooding can also damage less resilient sanitation systems, resulting in the spread of disease.

The World Bank estimates that achieving universal sanitation will require extensive investment – up to $49 billion in CAPEX per year until 2030 – but securing this level of funding is challenging, particularly in developing countries where it’s needed most. Consumers are less willing to pay for low visibility services, municipalities often lack the experience or resources to implement robust systems, and tariffs often fail to cover operating costs. At a national level, high debt levels have affected some countries’ borrowing capacity, and competing demands mean sanitation is not always prioritized.

Attracting funding from the private sector can help fill the gap, but historically, many wastewater initiatives involving private players have failed to deliver. By looking at some of the more successful examples of wastewater private-public partnerships (PPPs), however, we see that a project’s success often comes down to two main factors; its financial viability and scalability. 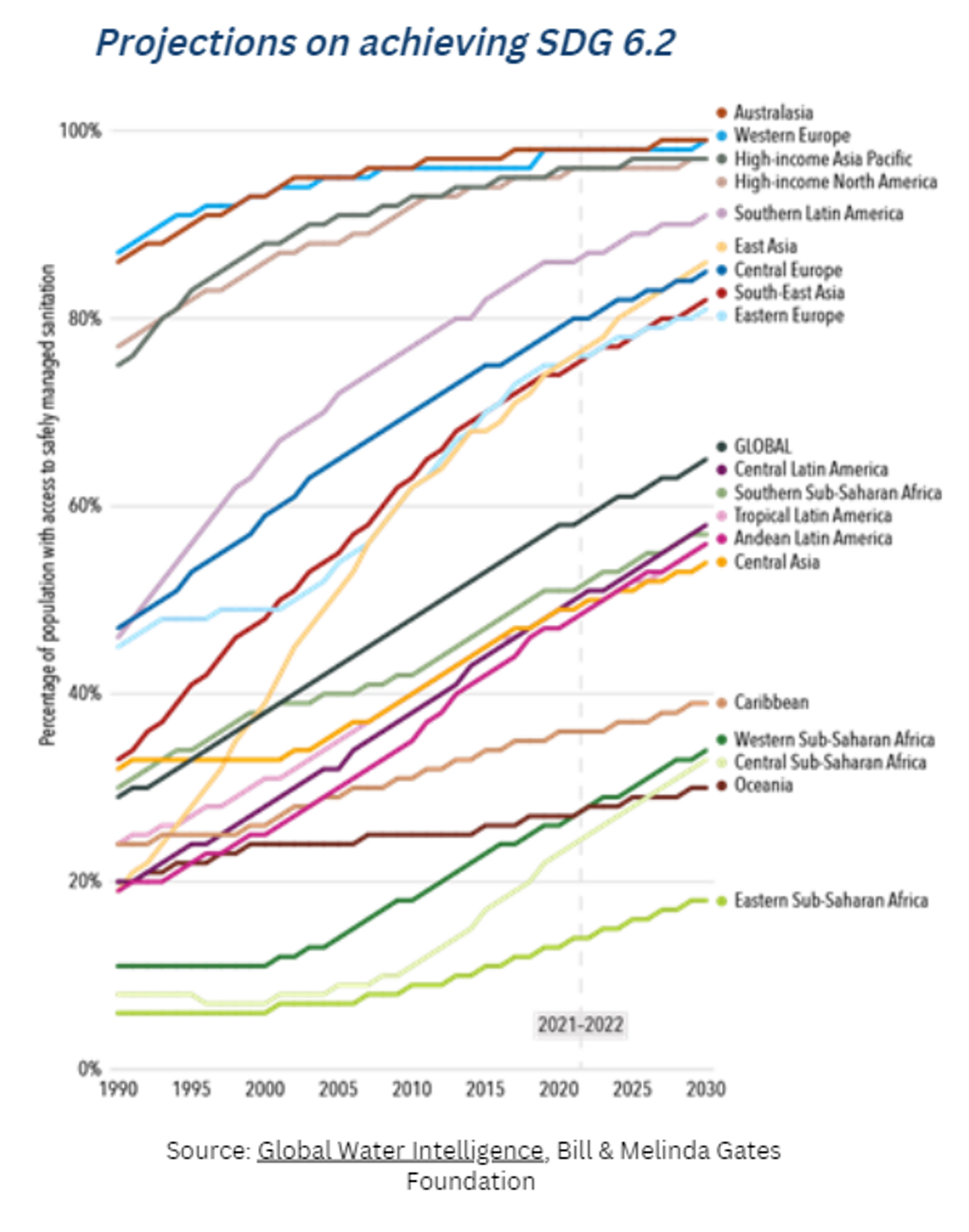 Multiple sources of funding, one goal

There are several ways to ensure wastewater PPPs are financially viable – which, in turn, maximizes their impact and longevity.

ndia’s first wastewater PPP, the Alandur Sewerage Project (1996), used multiple financing mechanisms to get off the ground. Prior to the project, Alandur (population ~165,000) used septic tanks with unregulated sludge disposal.

The private sector (IVRCL in collaboration with VA Tech Wabag) was contracted to construct a sewer system with a five-year network O&M and to build a wastewater treatment plant under a 14-year build-operate-transfer (BOT) contract. After the BOT expired, a five-year treatment plant O&M contract was awarded to Wabag.

For the initial sewer construction CAPEX, domestic grants and concessionary loans facilitated access to finance for a municipality with a low credit rating. Around 30% of CAPEX was collected through sewer connection charges, and tariffs were set at a reasonable level to cover operating expenses. This was made possible through a successful consumer outreach program, which increased willingness-to-pay. In addition, a take-or-pay condition guaranteed a minimum income for the private operator.

Elsewhere in India, in Sinnar and Wai, the private sector has been delivering faecal sludge management (FSM) services (the collection, transportation and treatment of waste without a sewer system) since 2018. Private companies
have been contracted for scheduled sludge collection, which generates more predictable cash flow and reduces transportation costs compared to on-demand collection. Two new sludge treatment plants (one in each city) have been built and their operations outsourced under design-build-operate-transfer (DBOT) contracts.

Sinnar’s treatment plant was funded by the municipality, whereas a grant from the Gates Foundation was awarded for the construction of Wai’s treatment plant. The municipalities also implemented a sanitation tax on all properties, with higher rates for non-residential properties. This is used to pay the private operators via performance-linked payments based on criteria such as the number of tanks de-sludged.

To mitigate the risk of non-payment, the municipality is required to keep three months-worth of contract payment as a reserve.

Around 95% of households have accepted the new scheduled service, with differential taxes resulting in some houses paying approximately one-fifth of what they previously paid. Furthermore, de-sludging has risen from seven to eight septic tanks per month to seven to eight per day – resulting in a substantial increase in sewage treatment.

Using existing resources to create new revenue streams can also increase the financial viability of wastewater PPP projects. One example comes from Windhoek, Namibia, where a wastewater recycling plant is operated by Veolia (67%) and Wabag (33%) under a 20-year O&M contract. Wastewater reuse provides around 35% of the drinking water supply for the city, helping to combat water scarcity pressures from the arid climate and population growth. Leveraging wastewater as a resource, in this case for potable water, has helped to attract private sector interest.

For non-sewered solutions, additional revenue streams can be generated through the integration of activities. For example, in the Indian State of Maharashtra, over 100 new sludge treatment plants have been co-located with solid waste treatment plants. Sludge is co-composted with solid waste and sold to farmers. Waste-to-energy approaches, such as producing biogas, are also promising new opportunities to offset operational costs and boost profits.

Focusing on improving the scalability of wastewater PPPs is another success factor – enabling operators to realize cost and productivity efficiencies.

In Brazil, achieving universal access to sanitation by 2033 is estimated to require a total CAPEX investment of US$143 billion. There, wastewater PPPs utilizing a BOT model have historically proven unsuccessful due to the extensive investment required at beginning of project and the long horizon for profitability (30-35 years).

With the goal of achieving universal access to sanitation requiring such extensive investment, a new PPP law was introduced in 2020. It mandates competitive bidding for new contracts, standardizes regulation to create a more stable business environment, and enables the aggregation of multiple municipalities for water and wastewater services. 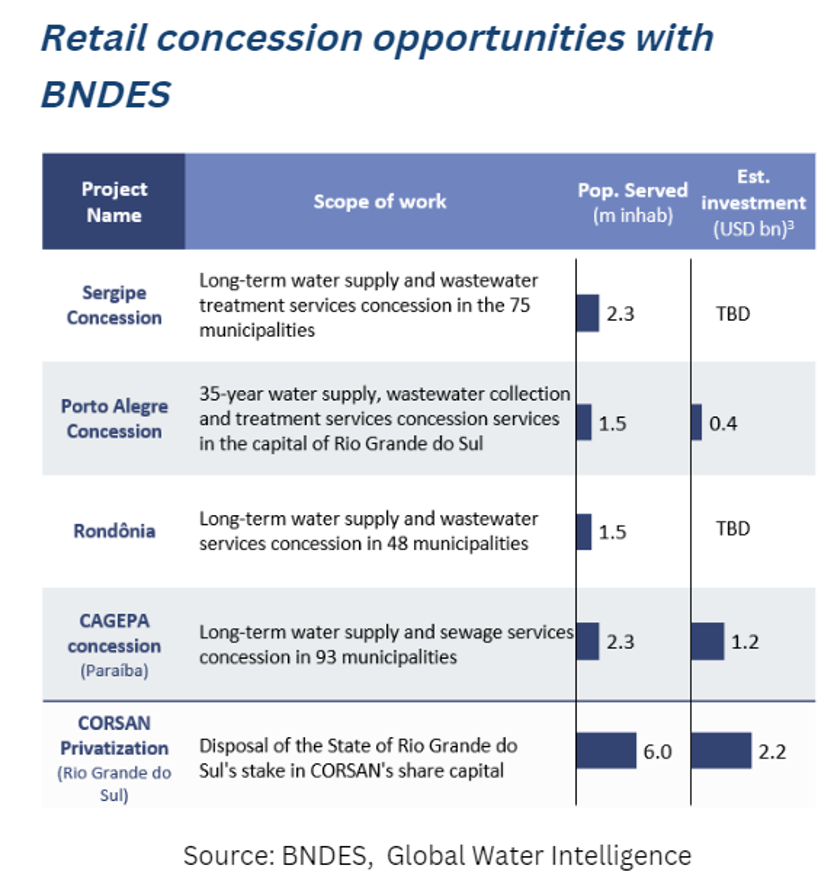 This law is expected to give rise to opportunities for private sector through large scale concessions and privatization of utilities, which are being promoted by the Brazilian Development Bank (BNDES).

However, achieving a similar level of scalability in non-sewered PPPs is more difficult. Non-sewered sanitation solutions are typically implemented in rural areas where low population densities make the construction of sewers unfeasible. In these instances, a more innovative approach is required.

In Wai and Sinnar (as mentioned above), scalability was achieved by integrating various FSM activities along the value chain including collection, transportation, and treatment of fecal sludge.

In Senegal, the National Sanitation Office of Senegal (ONAS), with financial support from the Gates Foundation, launched a FSM project in Dakar in 2011. For sludge collection, call centers were set up to facilitate open bidding between collection companies, which created scalability through the aggregation of demand. Cost transparency and increased competition decreased prices for users, while the volumes of sludge collected have risen – boosting revenues for private operators.

The ONAS also tendered seven-year O&M contracts for sludge treatment plants. Improved operational efficiencies and greater volumes of sludge treated (the number of trucks delivering sludge more than doubled) saw net profits increase by around 200% within four years. However, it is important to acknowledge that funding from the Gates Foundation was critical for the success of this PPP.

These examples demonstrate the importance of prioritizing the commercial viability and scalability of wastewater PPP projects. But there are other factors that contribute to a project’s success. Public outreach campaigns can play an influential role in improving willingness to pay, while strong political buy-in, transparent regulation, and financial risk mitigation can also help to attract private players.

Development institutions also play a critical role; grants and concessionary finance are still relied upon to meet CAPEX requirements, and technical and financial assistance is used for increasing the capabilities of municipalities.

Achieving universal access to sanitation will thus require wastewater PPPs to be carefully designed in order to attract the private sector but will also likely rely upon leveraging capital and technical assistance from development institutions.

Read more from this issue of currents