TREATING AND RECOVERING BRINE: progress in transforming brine into a useful resource

By 2025, Amane Advisors estimates that more than 140 million cubic meters (m3) of brine will be produced around the world each day. With desalination costs falling to new lows, largely due to the use of membrane technologies, more and more countries are  accelerating the use of desalination to increase water security and address the rapid depletion of liquid freshwater resources.

Turning brine from an environmental concern into a useful resource is one of the major challenges in the water sector today. Fortunately, progress is being made with the use of advanced technologies and best practices.

The volume of available freshwater is rapidly decreasing, leaving no other choice in many areas than to use seawater to produce drinking water. According to US Geological Survey, liquid freshwater represents less than 1 percent of the total water on earth and is set to decrease further under the increasing pressures from population growth, rapid industrialization, and the impact of climate change.

For example, countries such as Egypt, Jordan, and Morocco are faced with the challenge of rapidly depleting resources and fast-growing populations. The only option to address this issue is to consider nonconventional water treatment technologies, such as desalination. 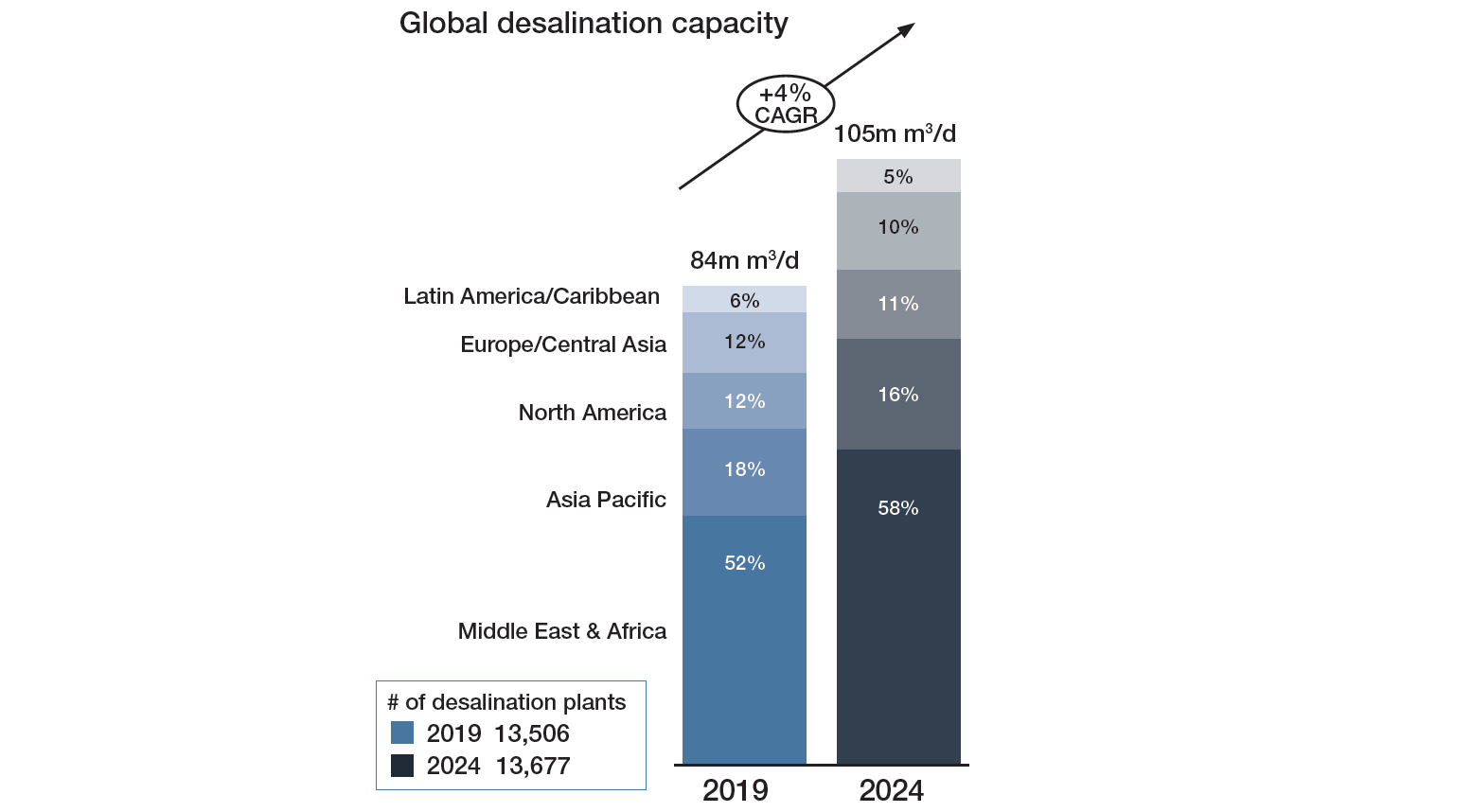 Desalination consists of removing salts, chemical residues and any other contaminants from saline water. In practice, desalination generates desalinated water on one side of the process, and a heavily concentrated solution containing all unwanted material – the brine – on the other side. Brine is a by-product liquid stream with higher concentrations of the feed water’s dissolved solids, some of the pre-treatment additives (including residual amounts of coagulants, flocculants, and antiscalants), organics, microbial contaminants, and other contaminants.

Globally, Amane estimates that every day about 110 million m3 of brine is produced, of which some 69 percent is attributable to the Gulf Cooperation Council (GCC) countries – the Kingdom of Saudi Arabia (KSA), United Arab Emirates (UAE), Qatar, Kuwait, Bahrain and Oman.

The increasing use of desalination

According to GWI DesalData, some 13,500 desalination plants are now in operation all over the globe, producing approximately 83 million m3 of drinking water daily.

“As environmental awareness increases, public authorities are requiring desalination players to implement solutions in an effort to reduce the impact of their brine reject on the environment.”

However, as environmental awareness increases, public authorities are requiring desalination players to implement solutions in an effort to reduce the impact of their brine reject on the environment. Solutions include dilution with other streams and outfall pipes equipped with multiport diffusers to provide a higher initial dilution of the concentrate as it enters and mixes with the receiving water body.

Situational context is important when considering the potential impacts of brine. For example, in some scenarios, the minerals put back into the sea were there already. According to the article “Hydrological Cycle – Vol. II – Evaporation from the Surface of the Globe,” referenced in a 2009 UNESCO Encyclopedia of Life Support Systems (EOLSS) report, approximately 1.35 trillion m3 of seawater is evaporated each day, and brine volume represents less than 0.00001 percent. Because of this, the brine impact is small when compared to the natural water cycle of seawater evaporation.

The Carlsbad Reverse Osmosis desalination plant in California, US, offers an example of successful brine management strategies to cooling water, at around 20 percent higher salinity than seawater (versus less than 50 percent for typical brine discharge). Diluted brine is discharged through a single 50-meter-long pipeline channel into a man-made sea lagoon. A 2019 academic review, titled, “Biological and Physical Effects of Brine Discharge from the Carlsbad Desalination Plant and Implications for Future Desalination Plant Constructions,” found no significant changes in organisms living on the sea floor and other biological indicators.

“The opportunity for recovery of constituents in brine offers the potential of an added value resource — including brine mining and  brine as a source for electricity.” 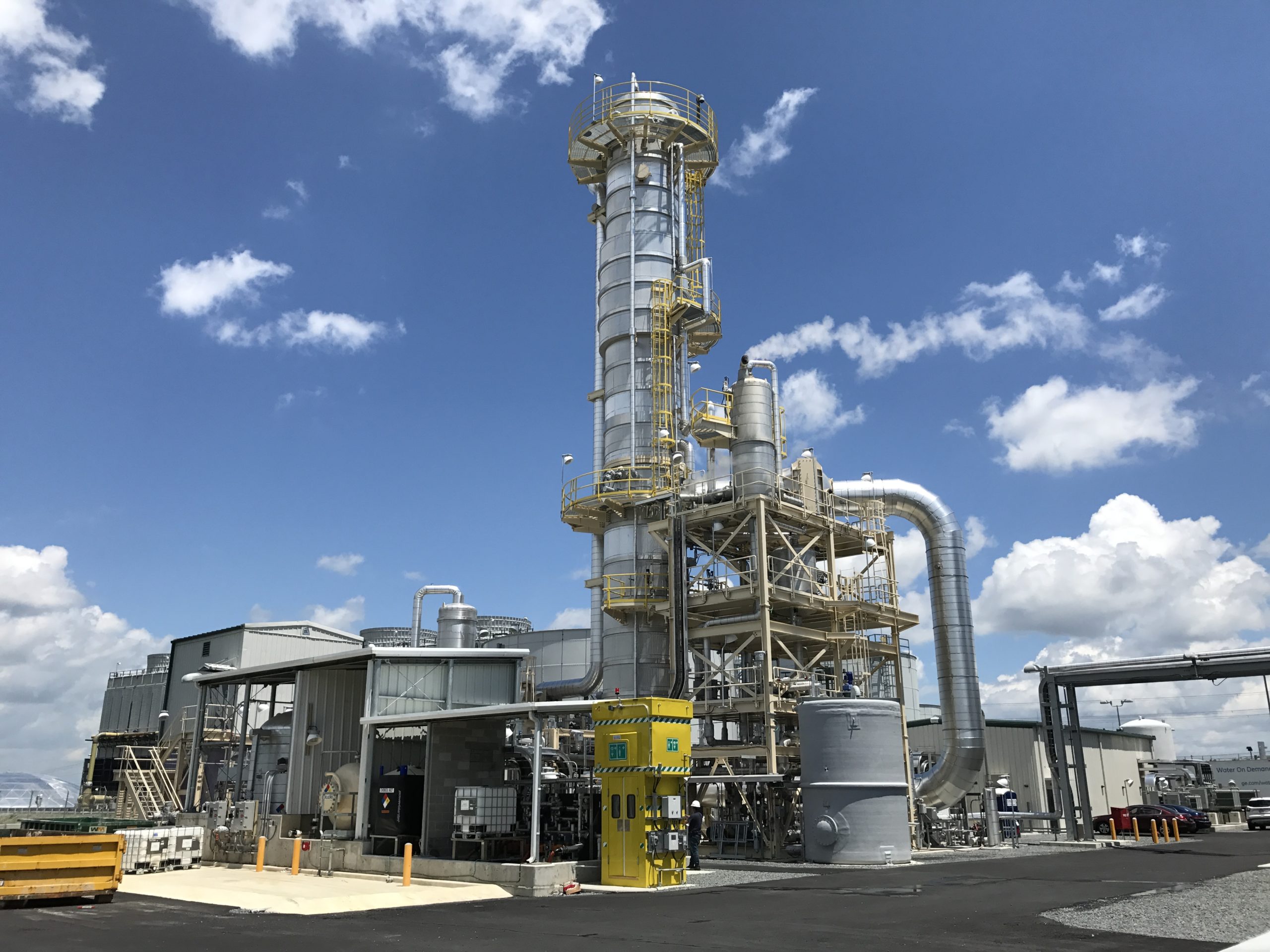 Brine as a valuable resource

Brine includes many useful ions, and recovering these materials economically could be one of the critical challenges for the water sector in the next few years. Magnesium – (Mg) and sodium-based products such as sodium chlorate (NaCLO3) and caustic soda (NaOH) are believed to return the highest benefits. Additionally, lithium (Li) – an essential component of equipment used in human daily life, such as in the battery of our smartphones and laptops – is coveted by many industries and fuels the research and development teams of many start-ups and conglomerates. The widespread adoption of electric vehicles is expected to significantly increase the demand for Li and increase its price, which is already traded at $7,500 per ton. Other useful materials include calcium, used for soil amendment, in construction industries, and as a fertilizer; and potassium in fertilizers.

More conventional technologies such as evaporation ponds can also be used to recover valuable resources. However, multiple evaporation ponds will be necessary to rotate between brine evaporation and resources extraction. There are also questions about the economic and technical feasibility of the new technologies. From the economic standpoint, market values must be higher than the CapEx and OpEx of the resource recovery, and disposal costs need to be higher than the mining cost to see an uptake. This is not yet proven. Meanwhile, from a technical standpoint, most of the technologies are at the laboratory or industrial pilot stage. What works well at lab-scale does not necessarily work well in the real world. To date, no proven technology is available for large-scale deployment. 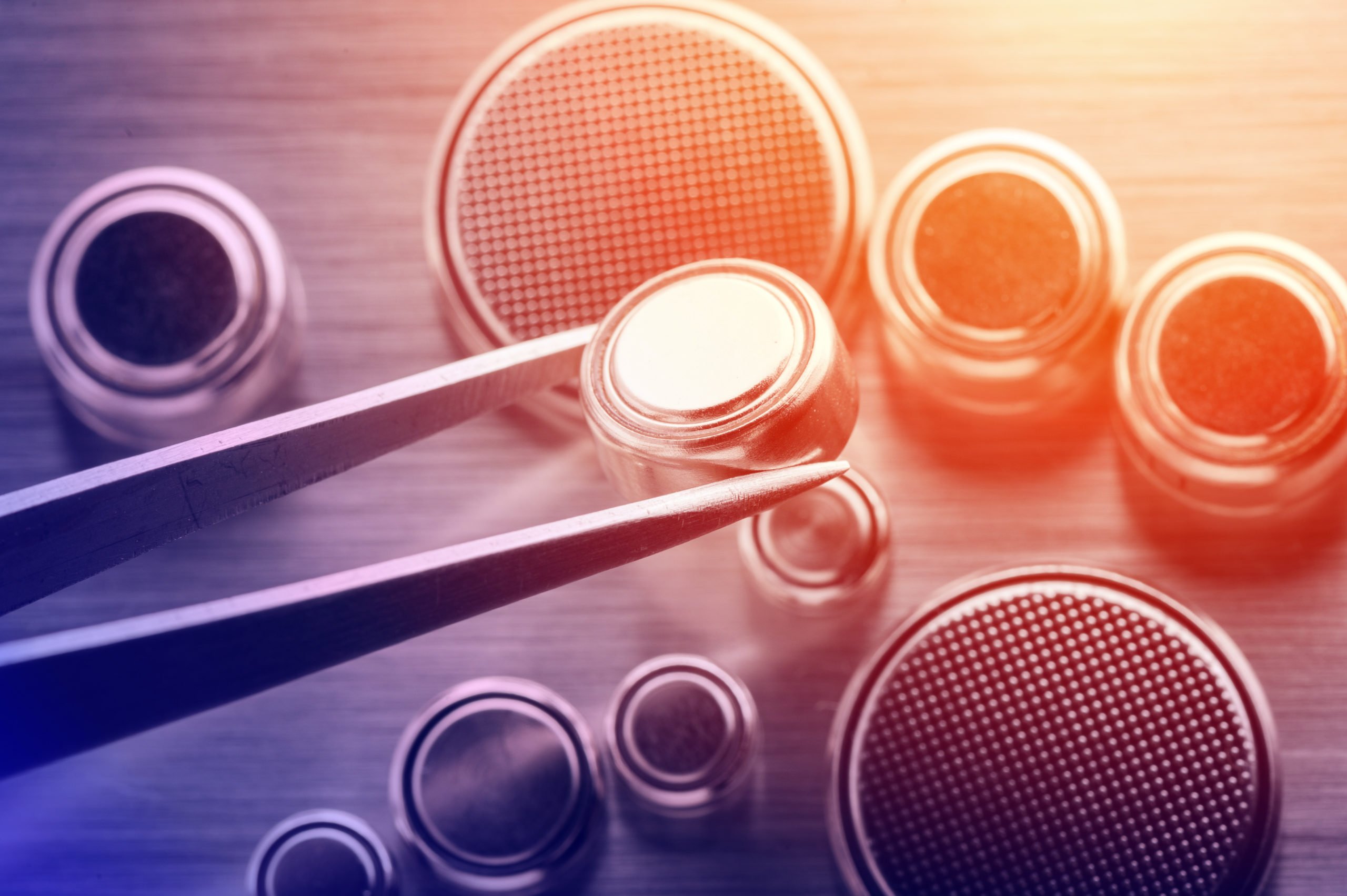 In any case, brine mining remains a focus point in the industry, and there have been a number of initiatives put forth that  encourage its development.

Saudi Arabia is particularly active and leads the global thinking on how to solve the brine challenge.

In addition, Sandooq Al Watan, a UAE social initiative for sustainable development, is organizing a new Centurium Prize Challenge entitled “ReThink Brine” to discuss how to find an offsetting economic value for the brine discharge, to create construction material. The competition seeks to protect the Arabian Gulf ecosystem and marine life and enable an ecofriendly construction and real estate sector.

Historically, water companies disregarded brine mining and focused on recovering as much water as possible. Selectively recovering resources relates more to the chemical industry rather than water treatment. Because of this, it is more likely that a chemical company will develop a brine mining technology than will a water company.

Brine as a source of electricity

The industry is also exploring the use of brine as a resource to produce electricity, leveraging the salinity gradient power. Potential technologies include Pressure Retarded Osmosis, which consists of converting the osmotic pressure of a saline solution to hydraulic pressure, and Reverse Electrodialysis, which consists of converting salinity difference into electric current with ion-exchange membranes.

Next steps include pilot projects and scaling these technologies to test them together in series to maximize overall recovery rates and electricity production and value. 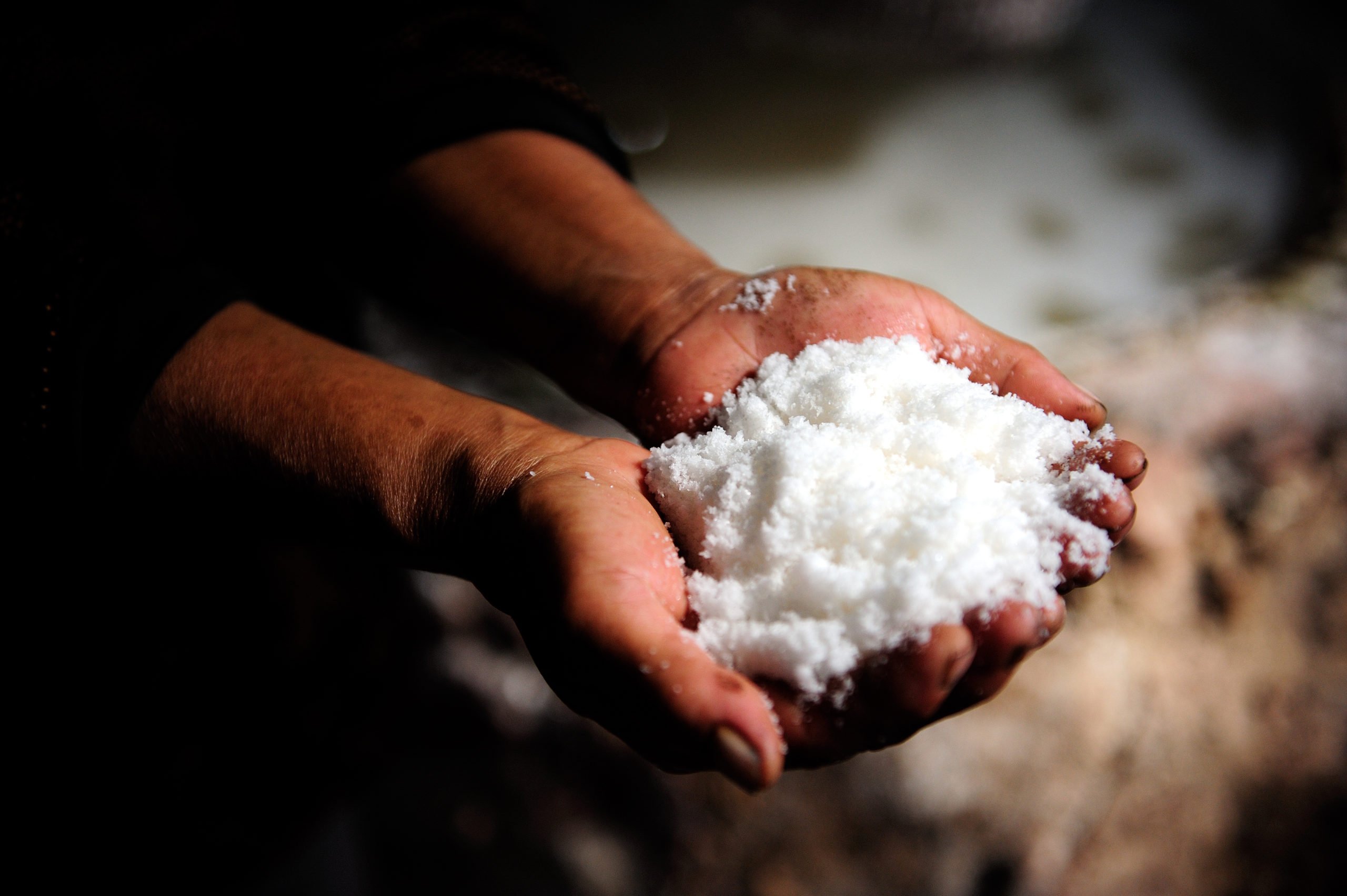 As 2025 gets closer, the cost of discharging brine to the sea is expected to increase as public authorities are taking up the environmental issues and defining stricter regulations for seawater discharge. For example, Australia’s Environmental Protection Act 1993 and Water Act specifies as its first priority that brine is to be treated to produce usable products wherever feasible, and then disposal must be done in accordance with
strict standards that optimize environmental protections. To that end, a 50:1 dilution of brine discharge is required. Moreover, across the globe, US Environmental Protection Agency licenses are required to discharge into the marine environment with claims individually assessed. These fees are significantly higher than discharge into wastewater lagoons and inland waters or land other than a wastewater lagoon.

The salinity challenges are difficult to navigate, but as new technologies emerge and older technologies are refined, the future may hold solutions to make brine a resource or disposed of while mitigating any potentially negative effects.

This website uses cookies to improve your experience while you navigate through the website. Out of these, the cookies that are categorized as necessary are stored on your browser as they are essential for the working of basic functionalities of the website. We also use third-party cookies that help us analyze and understand how you use this website. These cookies will be stored in your browser only with your consent. You also have the option to opt-out of these cookies. But opting out of some of these cookies may affect your browsing experience.
Necessary Always Enabled
Necessary cookies are absolutely essential for the website to function properly. This category only includes cookies that ensures basic functionalities and security features of the website. These cookies do not store any personal information.
Non-necessary
Any cookies that may not be particularly necessary for the website to function and is used specifically to collect user personal data via analytics, ads, other embedded contents are termed as non-necessary cookies. It is mandatory to procure user consent prior to running these cookies on your website.
SAVE & ACCEPT