Proud to Serve the Leaders in the Water Industry

The Global Water Awards is a prestigious industry award bestowed on top companies and projects with the most unique and impactful contributions that propel the water industry forward. This year, Amane Advisors is proud to have eight of our clients nominated for awards across five different categories, a testament that we have the trust of the top water industry companies. 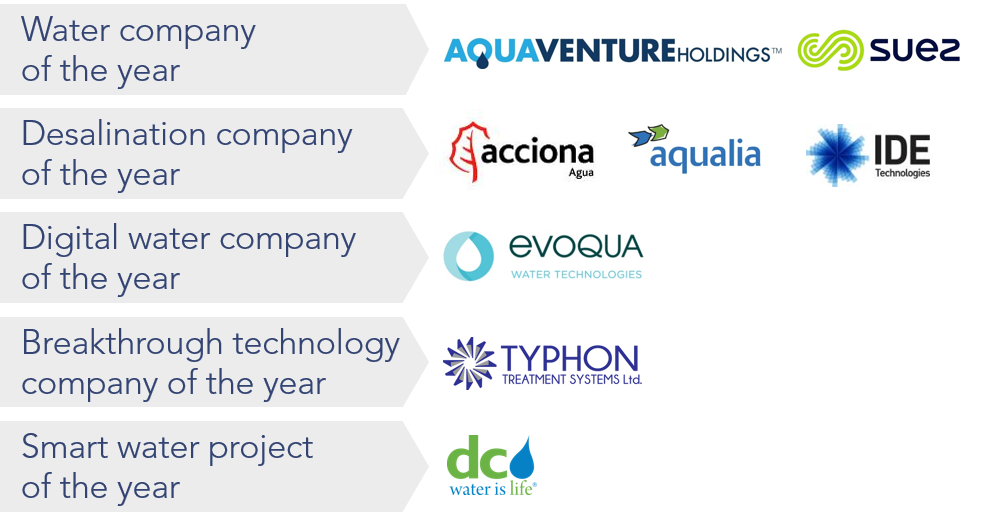 We are especially proud to serve not only the industry leaders but also the up-and-coming technology providers that have the potential to change the future of the water industry. Typhon Treatment Systems Ltd, nominated for “Breakthrough technology company of the year”, is an Amane client who has developed the world first UV-LED water treatment technology for high flow applications. This technology has already been successfully implemented for municipal water treatment, and it has strong potential for many industrial water applications.

Amane Advisors has been supporting Typhon in its commercialization efforts over the last several months, particularly with raising new capital to prepare them for their next stage of growth.

“Since we first got to know the company, Typhon has successfully developed its technology from lab to commercial application with one of UK’s largest water utilities. We believe it can be the next game-changer in the water industry, and we are glad that Amane’s expertise in water can help accelerating its growth”. – Thierry Noel

Typhon’s unique achievements are described in its nomination for the Global Water Awards:

What has it done?

In 2018 Typhon Treatment silenced doubters by scoring a first commercial contract for its UV LED system in municipal drinking water, demonstrating beyond a doubt that the technology can commercially competitive compared to traditional mercury UV lamps. Long thought to be viable only in very small applications, Typhon has dramatically moved the needle through its contract with United Utilities.

What makes it special?

Since the securing of its tie-up with United Utilities, Typhon’s system has been scaled up by a previously unthinkable factor, making units suitable for flows of 250m3/hr. With the client plagued by cryptosporidium outbreaks in recent years, the long-term contract will see Typhon’s system rolled out across the drinking water network, while investigation into wastewater applications is at an advanced stage.

Typhon has changed the game for UV LEDs in the water industry. Once mainly driven by the United Nations Minamata Convention ban on mercury, UV LEDs now have an economic driver to marry with the environmental agenda. With traditional mercury lamps reaching the limits of effectiveness, the transition to solid state UV water treatment has begun.

“Our mission for the last 10 years has been to help clients navigate the water business and it is an honour to see them succeeding in the industry and being recognized for their achievements.” – Thierry Noel

About the Global Water Awards

Established in 2006 by Global Water Intelligence, the awards recognise the most important achievements in the international water industry within several categories, and reward those initiatives in the water, wastewater and desalination sectors that are moving the industry forward through improved operating performance, innovative technology adoption and sustainable financial models.

Read more about the 2019 nominees